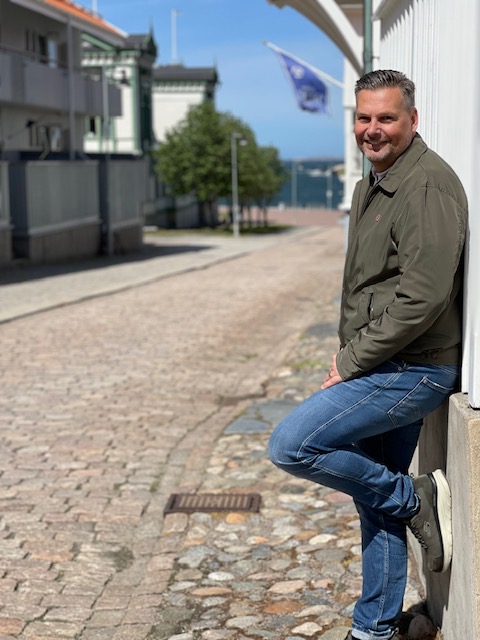 It is not surprising that Saab wanted Jonas Borgström to join Paratus as manager of sales; what is rather more unusual is that they rang him from Thailand – “It was the middle of the night in Sweden” – to ask if he was interested. This was 2011. Borgström was team leader of two ambulance centres in Gothenburg, and the Swedish conglomerate Saab had recently acquired a developer of innovative solutions for emergency response vehicles. “I’d been a paramedic, so I knew inside out what paramedics need technology to do for them. But I’d also been a fireman like my father before me – and that is how Saab ‘found’ me, on a beach in Thailand.”

Borgström’s mother was in Phuket with a rucksack from the Gothenburg fire brigade. A fellow-Swede recognized the logo and asked her if she worked there.

“No, but my husband does,” replied Mrs Borgström.

On learning her name, the fellow-Swede and Saab executive added: “Then perhaps you also know Jonas Borgström.”

Saab and Borgström had crossed paths in various small-scale technology projects at the Gothenburg ambulance service, but it was this chance encounter that made the Saab executive pick up the phone and invite him for an interview – “after he’d got back from Thailand obviously!”

The company Saab had acquired is now known as CSAM Paratus; CSAM acquired it from SAAB in 2018.

To Borgström, this takeover did not come a moment too soon. “SAAB makes fighter planes and military equipment,” he says. “It is a huge defence company, and Paratus was just a tiny part of that. So you don’t get the support you need. Now that we are part of CSAM, it’s completely different.”

Last year, Paratus was absorbed in the CSAM Public Safety division. “There are 10 of us at Paratus but Public Safety as a whole employs more than 100 people, all involved in thinking about that ecosystem of emergency response. This is a very creative context which will lead to plenty of opportunities in the future.”

Where is CSAM Paratus positioned in that response infrastructure, and how does Borgström leverage his lived experience as a fireman, paramedic – “and dispatcher” – to change and improve its products?

CSAM Paratus has several modules and components, but the core systems are CSAM Paratus Navigation and CSAM Paratus EMR (Electronic Medical Record). CSAM Paratus is operational in Norway and formerly in Kosovo, but the bulk of its customers are in Sweden, where it is market leader and present in 18 out of 21 municipalities. Adoption of Navigation is growing across fire departments, while the ambulance services that deploy Navigation and EMR serve roughly half the Swedish regions.

“Navigation gets an ambulance or fire engine from A to B,” says Borgström. “Dispatch sends out an assignment to the ambulance service or fire department which then distribute it to Navigation. You can read about the incident as you navigate towards it, all in CSAM Paratus Navigation.” 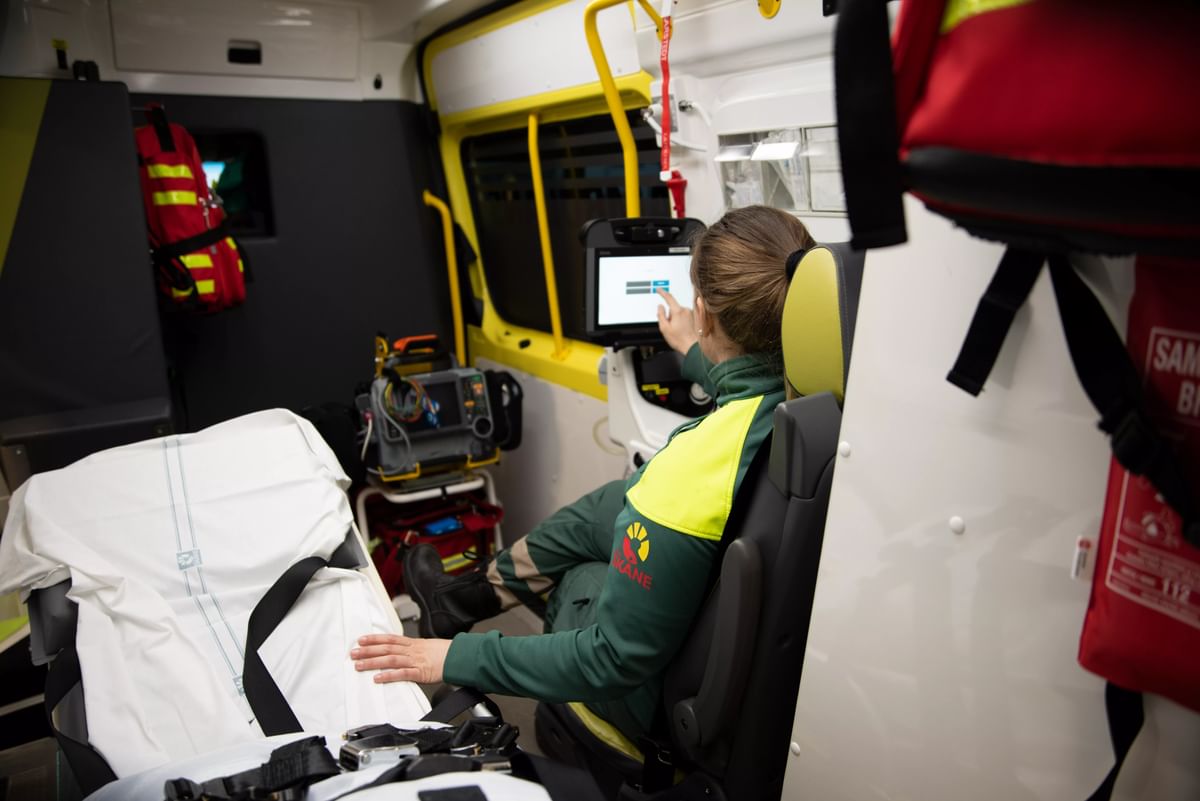 Borgström stresses that this is very different from using a conventional GPS to reach your destination. Mass market apps such as Google or Apple Maps have been developed from a consumer perspective. “In our system, we do some other stuff,” he says. “Let’s say that you’re going from Gothenburg to a location outside Kungälv which is about 20km away. The system makes calculations based on traffic rules that do not apply to fire engines or ambulances in the same way. Speed limits for instance. Emergency vehicles can sometimes take shorter routes not open to motorists. And we can include other functionalities in the route engine that are built specifically for fire engines and ambulances.”

In addition to Navigation to get them to the emergency as quickly as possible, ambulances also use CSAM Paratus EMR to access medical information about the patients. “We gave the module a technical and UX facelift last year. Within the medical record we also added decision support to improve patient outcomes.”

The system is integrated with the Swedish National Patient Register (NPÖ); patients have to give permission for Paratus EMR to use their data but of course this can be overridden in a “priority 1” emergency.

CSAM Paratus is also pursuing integrations with hospital records; two of the largest Swedish hospital regions use the Cerner Millennium platform and while Region Stockholm is yet to decide on its system, the rest will use the Cambio/Cosmic platform. “And that’s very good for us because we have integrations with both.”

A complication is that Swedish health regions have a tendency to interpret national data legislation in different ways. The clinical aspect of this regional autonomy is that the responsibilities of ambulance staff and paramedics can also vary.

“Paratus EMR can deal with this because one of the success factors that we have within the system is that it is highly configurable. So we do a lot of customization,” says Borgström. “None of the regions look the same. It’s the same setup from a technical perspective, but the UI and sometimes the functionalities can be different.

“Regions are used to a particular way of working and to them it seems that this can be the only way. But of course it’s not. But I think we are making progress in aligning the way ambulance services operate across Sweden, and in how they consume our products.”

As Borgström helps reset the mindset of the regions, he also steers the roadmap of CSAM Paratus itself.

“It is my role to provide the internal requirements to the system,” he says. “And I’ve also been the medical adviser to the developers on how to work with different types of features.”

One such feature is an ERM functionality to perform advanced drug calculations.

Borgström: “When you’re going to give a drug to a patient, it can be quite hard to calculate what dosage to administer. In Paratus EMR we now have a feature that helps paramedics calculate the right dosage based on a number of patient metrics.”

“Sometimes [for a dispatcher] it’s very hard to understand what has really happened, and then the dispatcher has to make decisions based on that.”

“For example, the patient is suffering from chest pain or has difficulty breathing. And then you go to the patient, and you have an idea what it is from the beginning. It can then be quite tricky to let go of that idea when what you need is to keep an open mind.

“Central to the AMLS methodology is that we try not to decide what we think it is – we explore different scenarios and use differential diagnosis analysis. You need the medical history and any hospital records. In Sweden, we don’t usually do a diagnosis in the ambulance.  We look for signs and symptoms and decide a treatment strategy accordingly.”

In CSAM Paratus, there are different modules to support the operational and administrative work. The entire information chain that saves lives from dispatch, navigation and patient outcome is captured in a statistical database.

“It’s very important within the system that it’s very measurable,” says Borgström. “Everything we do within the system we can measure, and we have a tool for the customer to leverage this, CSAM Paratus Insight. So we have a statistical database, which we have aside from our operational database. And we send over data a couple of times a day.

“Customers are using the data to inform their guidelines or to move an ambulance station to a more convenient location to reach people in a more efficient way. That is probably the thing that has been having the largest impact for our end-users, to use the information or the data from the operational side to provide the basis of important decision-making.”

Borgström’s experience as firefighter and paramedic was the perfect preparation for his role at CSAM Paratus. “I think in general it is good to hire people with different kinds of backgrounds,” he says, “people who don’t necessarily have a technical background. Within the practice of public safety, I think we need to have more people from a non-tech background.”

Product Manager at CSAM is not his only job; Borgström also works professionally as a freelance photographer. “I get commissioned to do portraits, weddings, everything. My next assignment is for the Swedish Jujutsu Association, and I’m looking forward to that because I’ve been a lifelong practitioner of this martial art.”

As a firefighter and paramedic, fitness was an important part of the job, but Borgström is just as passionate about helping his former self perform more effectively through smart technology.

Does he miss being a paramedic?

“I miss the clinical part,” he says, “the direct experience of saving lives. But I speak to paramedics all the time about their work – and how we can make CSAM Paratus better for them.”

One way of saving more lives through Paratus technology is to grow its market. “We are the leading provider in Sweden,” says Borgström. “We have been for 15 years. And I think we have done a lot. To develop the business in Sweden we need to dig even harder and to complement that we can also add new markets. Actually, that’s something we’re going to work more on during the summer.”

Another opportunity to effect change is through the CSAM eHealth ecosystem. “It’s very important that we continue looking into the different kinds of products we have within CSAM and see if we can have any synergies with combining two different systems to be a success. That is very important,” concludes Borgström.